CAUSE AND TIMING OF DAMAGES

The Institute of Seatransport participated in the IFSPA 2017 (International Forum on Shipping, Ports and Airports), conducting an Industrial Session at PolyU on Wednesday afternoon, 24th May 2017 when the day started with yellow rain at 0615, followed by red at 0930 and black at 1130 before returning to yellow at 1230.  It was most encouraging to see the majority of those enrolled turn up on time.

The session began at 1330 and finished at 1800 with (a) the Editor presenting a 2.5-hour workshop on practical aspects of marine hull insurance claims with emphasis on General Average, Particular Average and Constructive Total Loss, and (b) Mr. C H Wong, a well-known logistics & projects consultant and director of Five Oceans Marine Ltd., presenting on the role of Hong Kong as an international maritime centre under BRI.  A couple of interesting issues on the hull insurance claims were discussed, which the Editor would like to share with readers.

One of the case studies involved a container carrier on liner service trading between Far East/American ports which lost steering control on 1st December 2012, necessitating towage to a port of refuge where underwater inspection revealed that the vessel’s rudderstock had a fracture which appeared to be beyond repair.  All laden containers were discharged (to enable repairs to be effected in dry-dock) and forwarded to destinations by a sister-ship.

The vessel was insured on hull and machinery, etc., for 12 months commencing from 1st April 2012, subject to Institute Time Clauses – Hulls 1/10/83 [referred to “ITC” here] and Institute Additional Perils Clauses – Hulls 1/10/83 [referred to “IAPC” here].  The insurance is subject to English law and practice and the relevant insurance conditions applicable to claim for the damage to the rudderstock are:

1.1 the cost of repairing or replacing ….

1.1.2 any defective part which has caused loss or damage to the Vessel covered by Clause 6.2.2 of the Institute Time Clauses – Hulls 1/10/83

1.2 loss of or damage to the Vessel caused by any accident or by negligence, incompetence or error of judgment of any person whatsoever

Both ITC Clause 6.2 and the IAPC are subject to due diligence proviso: “Provided such loss or damage has not resulted from want of due diligence by the Assured Owners or Managers.”

Particular Average is a partial loss of the subject-matter insured caused by peril insured against, which is not a general average loss (as defined by section 64(1) of the Marine Insurance Act, 1906).

The effect of the wording, “This insurance covers loss of or damage to the subject-matter insured caused by” is that the Policy which will respond for a claim for Particular Average will be the Policy current at the time when the loss occurred or the damage was sustained.  The incorporation of the IAPC in addition to the ITC allows exception for latent defect cover (IAPC Clause 1.1.2), let alone that the extension (in particular, “any accident” cover) affords the less weighty burden of proof.

It is worth noting that whilst IAPC Clause 1.1.2 only uses the words “defective part”, the link to ITC Clause 6.2.2 must mean that the word “latently” is implied.  Furthermore, a “latent defect in the machinery or hull” is not only confined to a flaw in material but can include wrongly assembled parts provided that they satisfy the usual test of latency – “defect which could not be discovered by a person of competent skill and using ordinary care” , definition given by Carver approved in the “Dimitrios N. Rallias” (1922).

Taking into the familiar “Nukila” test (1997), it is suggested that, for processing Particular Average claim, the following questions should be borne in mind:

We are considering the first two questions herein.

Burden of proof is on the Assured to show on a balance of probability that the loss was caused in the way alleged.  The degree of proof required is to show a balance in favour of an accidental loss by peril(s) insured against.  If, as in the “Popi M” (1985) case where an old vessel sailing in calm seas with fair weather developed a fracture allowing seawater to enter and sank, the occurrence of the event, collision with a submarine, as alleged, is extremely improbable, on basis of common sense, the true cause being in doubt, the Assured has failed to prove.

In practice, most accidents are straight forward having known causes, and the claim for loss or damage would then be based on that known cause, e.g. fire, collision, contact, grounding, etc.  However, machinery damages often require technical investigations on both cause and timing, necessitating, on occasions, metallurgical and/or other special tests.

Cause of damage to the rudderstock

There is suggestion that fatigue failure of a rudderstock is not an event that can be expected in the normal operation of the vessel, hence the rudderstock damage would not be a result of normal wear and tear and the damage being “accidental” in nature would fall within the wide cover by IAPC.   However, in practice, Underwriters would expect that the words “any accident” (which probably cover event without apparent cause) are likely to be used only when the cause of loss or damage is obscure or unexplained.  Furthermore, whilst one can insist that the Assured have proved prima facie that the damage was caused by a peril insured against, he would probably be expected to demonstrate that the whole damage occurred during the currency of the policy in force, since it is not uncommon that the fatigue fracture would be of a progressive nature, i.e. damage occurs and develops, without becoming apparent, over a period of time that spans more than one policy.

It is also believed that for other good reasons, e.g. loss prevention, it would be advisable for a prudent Ship-owners to be aware of the cause of damage.

Results of the investigations

There was negligence of repairers in July 2010 (2010/11 Policy) resulting in a latent defect causing damage to the rudderstock culminating in a breakdown in December 2012 (2012/13 Policy).  On the agreed fact that, if the true facts had been known, the rudderstock was already damaged beyond repairs, would have been condemnable, and was worth only scrap before 1st April 2012, i.e. prior to the inception of the 2012/13 Policy, no claim in respect of the cost of replacement of the rudderstock can lie against this policy year, since the rudderstock was incapable of being damaged any further.  The damage to the rudderstock would be treated as progressive over the 2010/11 and 2011/2012 policy periods, being reasonably split 50/50 in the circumstances (as agreed by the Surveyors).

The ITC Clause 11.4 provides that “No claim under this Clause 11 shall in any case be allowed where the loss was not incurred to avoid or in connection with the avoidance of a peril insured against.”  It is the peril which is operating or which will operate which determines the matter.  Hence, the claim for general average falling on the vessel arising from the loss of steering control on 1st December 2012 would fall on the 2012/13 Policy insuring the vessel when the peril was operative.

All claims, General Average and Particular Average, arising out of the same accident are subject to one Deductible in terms of ITC Clause 12.  The Deductible is divided between the three policies over the respective claims attaching thereto.

2010/11 Policy pays 50% of the reasonable cost of replacing the rudderstock less 50% of its scrap value (if any) and proportion of Deductible;

2011/12 Policy pays 50% of the reasonable cost of replacing the rudderstock less 50% of its scrap value (if any) and proportion of Deductible;

It is advisable to pay proper attention to (a) the plain sense of the policy wording, which may all require a different approach to the same set of facts and (b) the facts of each case.  “In practice, average adjusters are required to produce equitable and practical solutions based on the facts of individual claims and the theoretical difficulties endemic in the topic are generally settled by agreement with underwriters.” (Mr. Donald O’May)

Readers are reminded that the “Longchamp” case where the Court of Appeal has reversed the 2014 High Court judgment is coming up for trial in the Supreme Court. 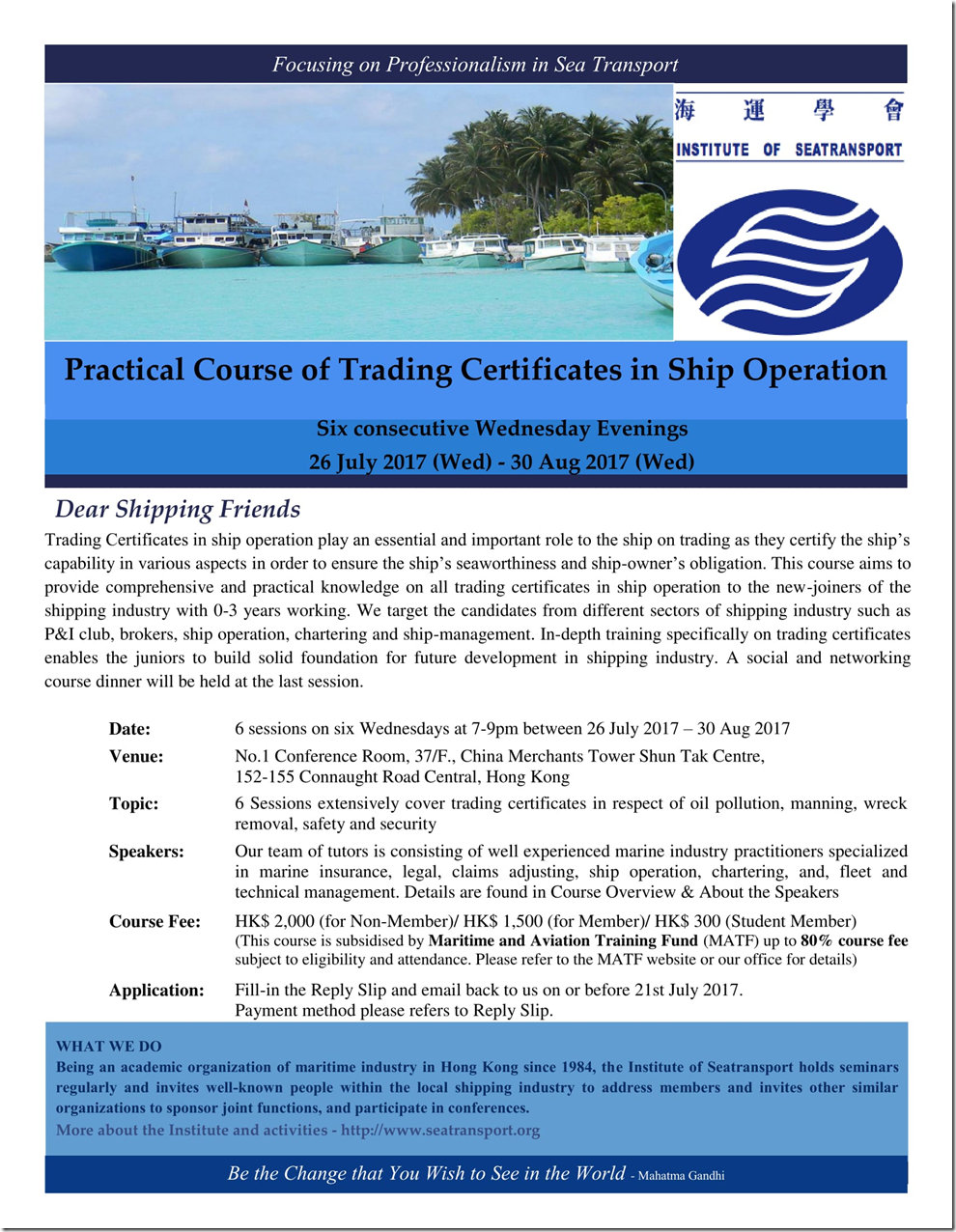