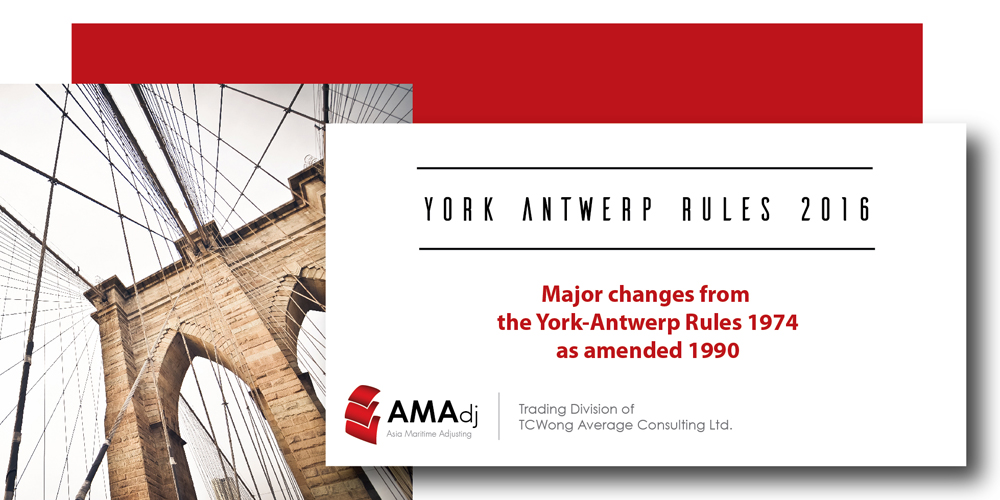 It is not surprising to note that many contracts of carriage incorporate the York-Antwerp Rules 1974, as amended 1990.  Following our briefing on the newly adopted York-Antwerp Rules 2016 summarizing the major changes from the 1994 version, we have received enquiries with request to outline the major differences between the 2016 and the 1974 as amended 1990 versions.

Accordingly, we consider it being advisable to highlight the major differences from the YAR 1974/1990 whilst noting minor amendments made to “tidy up” the text, modernising some terms and providing a more coherent numbering of paragraphs.

The difference is the inclusion of a reference to the Rule Paramount in the second paragraph.

Under this Rule (included since the 1994 version) it will be necessary for those claiming an allowance in general average to prove, on the basis of Rule E, first paragraph, that both the general average act and the quantum of allowances are reasonable.

The 1974/1990 Rule B having been inserted as a second paragraph of the Rule A, a new Rule B was introduced (in 1994) to achieve uniformity for general average involving tug & tow in commercial activities, i.e. not in a salvage operation.

The 2016 Rule C (same as 1994) provides for general exclusion from general average the allowances in respect of pollution and damage to environment.

Also, the second paragraph of 1974/1990 Rule was reworded (3rd para in the 2016 Rules) to take into account that loss of market should not be regarded as an indirect loss (in accordance with the decision of Czarnikow (C.) Ltd. v. Koufos – 1969).

The 2016 Rule E provides clear time-line for the notification of a claim in general average and provision of documents and evidence with the intention to help speed up the adjusting process, and paragraph 3 allows:

(a) For notification or particulars in support a claim – 12 months from the termination of the common maritime adventure or payment of the expense;

(b) For particulars of value – 12 months from the termination of the common maritime adventure.

Paragraph 4 of 2016 Rule E is a new provision that any party pursuing a recovery from a third party shall advise the average adjuster and supply full particulars within 2 months upon receipt of the recovery achieved.  The adjuster should take note ensuring that any allowable credit to the general average is made in the appropriate manner.

The 2016 Rule G includes a non-separation wording (first introduced in 1994) based on the Standard Non-Separation Form (used for many years as an attachment to security documents), but with the inclusion in the text of the “Bigham” clause acting as a ceiling on allowances made under this Rule.

The following example illustrates the working of the “cap”:

RULE II.          LOSS OR DAMAGE BY SACRIFICE FOR THE COMMON SAFETY

The inclusion of the wording “property involved in the common maritime adventure” is to emphasise that pollution liability falling on such property are not covered.

Under the 2016 Rules, only those losses caused by the heat of the fire will be excluded; other losses resulting from heat so long as they are a direct consequence of the extinguishing measures will be allowable.

The wording of Rule VI paragraph b) is new to the YAR 2016, which concerns the treatment of Salvage.

We quote below extract from the CMI Guidelines:

“The wording of Rule VI paragraph (b) is new to the York Antwerp Rules 2016. It arises from concerns that, if the ship and cargo have already paid salvage separately (for example under Lloyd’s Open Form) based on salved values (at termination of the salvors’ services), allowing salvage as general average and re-apportioning it over contributory values (at destination) may give rise to additional cost and delays, while making no significant difference to the proportion payable by each party.

A variety of measures to meet these concerns have been considered, ranging from complete exclusion of salvage to using a fixed percentage mechanism. Such measures were found, during extensive CMI discussions to produce inequitable results or were impossible to apply across the range of cases encountered in practice.

It was pointed out that many leading adjusters will, when appropriate, propose to the parties that if re-apportionment of salvage as general average will not produce a meaningful change in the figures or will be disproportionately costly, the salvage should be omitted from the adjustment; it is then up to the parties to decide whether it should be included or not. However, it was considered that a means should be found to make this practice more universal and to set out express criteria that would help to ensure that the allowance and re-apportionment of salvage as general average (where already paid separately by ship and cargo etc.) would only occur in cases where there was a sound equitable or financial basis for doing so.

The average adjusters will still be required to exercise their professional judgment in applying paragraph (b) because several of the criteria (i-v) that are listed require a view to be taken as to what should be deemed to be “significant” in the context of a particular case. Because of the wide range of cases that the York-Antwerp Rules apply to, it was not considered desirable to offer a fixed definition of how “significant” should be construed, other than to note that the objective of the new clause was to reduce the time and cost of the adjustment process where it is possible to do so.

When assessing whether there is a significant difference between settlements and awards for the purposes of Rule VI(b)(v) the adjuster should have regard only to the basic award or settlement against all salved interests before currency adjustment, interest, cost of collecting security and all parties’ legal costs.”

Under the 2016 Rules allowances can be made for cargo sacrificed when used as fuel.  No investigation will need to be made by the average adjuster as to the adequacy of the quantity of fuel provided.  A credit will have to be made only when ship’s materials and stores are used as fuel.

RULE XI.     WAGES AND MAINTENANCE OF CREW AND OTHER EXPENSES PUTTING IN TO AND AT A PORT OF REFUGE, ETC.

New words “entry or detention” are added to paragraph (b)(i) to specify that allowances at a port of refuge are only made possible either when the ship and cargo remain in peril after arrival at the port of refuge or when repairs necessary for the safe prosecution of the voyage are being effected.

The definition of “port charges” is newly added under paragraph (c) (ii) in view of the comments made in the “Trade Green” (2000), which are contrary to the established practice and intentions of successive versions of the York-Antwerp Rules.

In place of the deleted 1974/1990 wording dealing with overtime, a new text of paragraph (d) is introduced to specify the circumstances in which allowances might be made in general average, the new paragraph of Rule C notwithstanding, for costs incurred to prevent or minimize environmental damage.

The wording in the 1974/1990 Rule, “caused in the act of”, being considered too wide, was altered to “sustained in consequence of”.  Accordingly, for an allowance to be made under this 2016 Rule, a casual connection will have to be demonstrated between the act in question, handling, etc. and the damage sustained.

Paragraph (c) provides that the costs of cleaning, painting or coating of bottom shall not be allowed in general average unless the bottom has been painted or coated within the 24 months (against 12 months as specified in YAR 1970/1990) preceding the date of the general average act in which case one half of such costs shall be allowed.

RULE XVI.       AMOUNT TO BE ALLOWED FOR CARGO LOST OR DAMAGED BY SACRIFICE

Wording is added in paragraph (a) (i) to deal with issue arising from place of final delivery not being port of discharge, giving express sanction to the long-established adjusting practice.

Recognition of the adjusting practice that low value cargo may be excluded from contributing to general average is now expressed in paragraph (a) (ii).

Furthermore, salvage payment which is not included in general average under the terms of Rule VI (b) would form “an extra charge incurred in respect thereof subsequently to the general average act” and a deduction in order to establish the contributory value of the property.  Additional wording in paragraph (b) makes it clear that the deduction in this respect is limited to the actual salvage payment made including interest and salvor’s costs.

Provision is made for the calculation of the contributory values of ship and cargo in the circumstances where Rule G, 3rd and 4th paragraphs concerning Non-Separation agreement, is applicable.

There is no provision for Commission at 2% to be allowed on general average disbursements.

Under the YAR 2016, interest will be fixed annually at ICE LIBOR on the first banking day of each year in the currency of the adjustment plus 4%.  The interest is to run for 3 months after the date of adjustment.

A significant change is made to the treatment of cash deposits.  Removing the joint account requirement, the new rule sets out more clearly how the average adjuster should handle such funds.

We quote below extract from the CMI Guidelines:

“Under Rule XXII(b) the adjuster is required to hold deposits in a special account constituted in accordance with the law regarding holding client or third party funds that applies in the domicile of the appointed average adjuster.  Unless otherwise provided for by the applicable law, CMI recommends that any special account should have the following features:

(b) 6 years after the date of the common maritime adventure, whichever comes first.

As recognized in the opening words of the Rule, its provisions may be invalid in some countries.